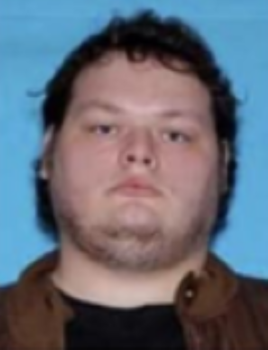 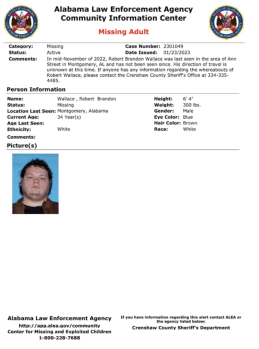 “I talked to Wallace,” said Crenshaw County Sheriff’s Investigator Chris Stewart. “We had a video call with his sister and he told me how he got there. He is OK, and we let his family know.”

The Crenshaw County Sheriff’s office requested the community’s help in locating Wallace, who was last seen by family on Ann Street in Montgomery in mid-November.

Law enforcement shared a missing person alert on social media late Monday afternoon, and sightings of Wallace were reported. Residents commented on the post and called the Crenshaw County Sheriff’s Office, reporting they saw Wallace near the Crenshaw/Montgomery County line heading south on U.S. Highway 331 around 5 p.m. Monday and later heading north in the same area around 9 p.m.

One caller reported Wallace was seeking a ride to Gardner Road in Montgomery County.

“Wallace is not considered a danger,” Stewart said during the search. “He’s never been violent with law enforcement in the past. He’s very polite. He has some health concerns, and his brother hasn’t seen or heard from him.”

Wallace is a white male, 6-foot-4 and weighing around 300 pounds. He has brown hair and blue eyes.

Citizen reports indicated Wallace sports a full-length, dark beard and could have been wearing black pants and a white shirt.

A Goshen resident reported contact with Wallace, who she said was requesting a ride to the “South Montgomery County Airport.”

“He was trying to flag people down to give them money for a ride to Gardner Road,” Stewart said. “He identified himself as Brandon and she saw the Facebook post. She looked at the picture and looked at him, then told him she would get her husband and they would give him a ride. By the time she got her husband, he had disappeared.”