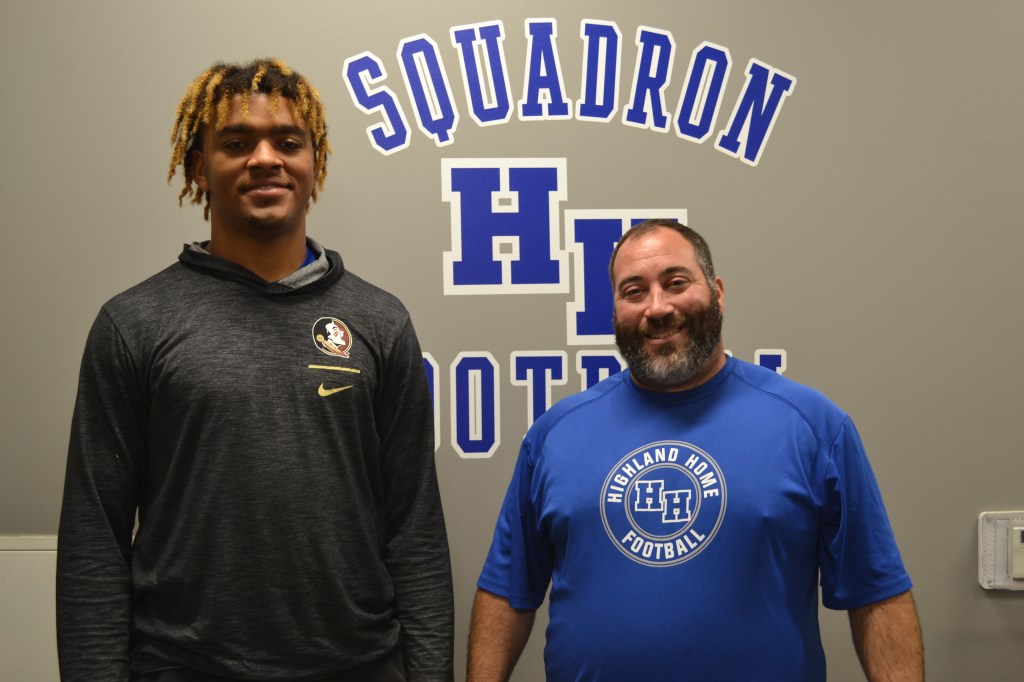 Highland Home School finished its season 12-2 in 2022, falling a game shy of the state championship game in back-to-back years.

For their efforts, both Flying Squadron head coach Will Pouncey and senior defensive lineman Keldric Faulk earned Coach of the Year and Player of the Year for Crenshaw County, respectively.

“It means a lot to me to be recognized, but it’s all about what we accomplish as a team,” Pouncey said. “All of our credits and everything we get, all the honors that we get, is because of the work everybody put in. It wasn’t because of what I did or the work I put in – it was a group effort collectively, and none of this would be possible without it. We wouldn’t be recognized individually if we weren’t collectively having success.”

After losing to Clarke County in the Class 2A semifinals a season ago, Pouncey said the objective for his squad was to get back to the semifinals and find a way to advance to the championship game.

“Of course, we didn’t get it done there in the end, but just to get back to another semifinal was special on its own,” Pouncey said. “We kind of knew in the offseason. We had another year in the weight room and in our preparation … One of our goals was to get there, but our ultimate goal was to get over that hump. It still is, and I think we have good opportunities coming up in the future to continue to try to get over that hump and get to that next level to get to the state championship game and hopefully bring back a blue trophy to Highland Home.”

He added not reaching the state championship game did not diminish the positive steps the program made in 2022.

“We won the county championship for the first time in 22 years, I believe, by defeating Brantley and Luverne in the same season,” Pouncey said. “We have done that in the 22-year span, but some of those were jamborees. To actually win a true championship against two good county rivals was special.”

Highland Home’s season ended in a 44-15 loss to 2A runners-up B.B. Comer, but Pouncey credited the Tigers for being the better team on that night.

“We didn’t play our best game,” Pouncey said. “We turned the ball over. We made a bunch of miscues, but we’re not going to dwell on that. We went 12-2, and we won 12 ball games. That’s a lot to be excited about and a lot to be thankful for. It’s not ‘Cry because it’s over.’ It’s ‘Smile because it happened.’”

Faulk, who recently flipped his commitment from Florida State to Auburn on National Signing Day, capped off his Player of the Year-worthy campaign with an eight-sack season on defense.

“I’m not looking forward to next year not having him out there, but I know we have a lot of capable guys who are going to work really hard.” Pouncey said. “They know the standard, and a lot of that is the standard Keldric has set. He always set the pace in the weight room in the offseason, and our guys, by watching him, they know what it takes to be successful.”

The recent graduate said he didn’t go into the season with any personal goals and added his focus was on the team first.

“At first, my first game was to set the tone for the rest of the season to come out with a big ‘W’ and show the rest of the 2A area that we’re coming to play,” Faulk said. “We’re not here to joke around, and that’s what we did. We didn’t play our best game, but we came out with the ‘W.’ Throughout the course of the season, we hit our bumps in the road, but our team faced adversity before. My biggest thing was to be a state championship team, you have to face adversity head-on.”

Faulk said it was an honor to be named Player of the Year for the county and compete against several great athletes to earn it.

“Being recognized as Player of the Year, it’s a blessing,” he said. “God gifted me with a great talent. I come out, and I put in the work every day to make myself better, 1% better, every day. There’s a lot of guys in this county that are really great players – Kellen Brooks from Luverne and Kedrick Brown from Brantley. Those guys are some really great players, and we’ve got some of those great players on our team, too.”

The Trifecta Tri-County Team Selection Committee chose the following 10 players as its best in Crenshaw County for the 2022 high school football season: