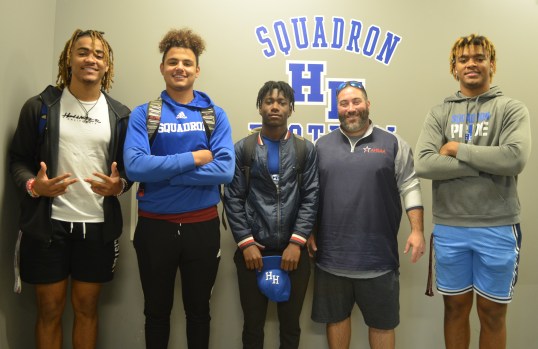 Four Highland Home School football players have the opportunity for next-level recognition in January by participating in the 2023 National Combine and the 2023 U.S. All-American Bowl Game.

Senior Keldric Faulk will play in the bowl game at the Alamodome in San Antonio on Jan. 7 and three sophomores — Tyler Chaney, JJ Faulk, and CJ May — will join players from across the country on Jan. 6 to demonstrate their physical talent and compete before high school and college football’s top scouting organizations and the All-American Bowl Selection Committee.

“The All-American Bowl is a nationally televised game,” said head coach Will Pouncey. “The biggest recruits in the nation will be there. It’s the biggest high school all-star game there is.”

Players like Keldric Faulk are invited to the game based on their rankings and athletic record. As a four-star athlete, Keldric is ranked 79th in the nation and seventh among players in Alabama, according to Rivals.com.

“Keldric is a massive human being and a great kid,” Pouncey said. “His transcripts are impeccable. The way he does anything is the way he does everything. He’s good in the classroom and on the field. He’s always taking up time with kids and has volunteered with Little League games.”

Recruiters recognized Keldric’s skills early, extending offers after seeing him at football camps in his eight and ninth grade years. He is committed to play with Florida State in 2023.

“What inspired me to pursue football is when, in my eighth-grade year, I got my first offer,” Keldric said. “I really didn’t think I’d be playing college football but once I got an opportunity, I see the opportunity to better my life and my family’s life.”

But in spite of his success, Keldric is humble, Pouncey said, and deserves the recognition he receives.

“Being invited is extraordinary,” Keldric said. “This is something I never thought I was going to do. It’s an honor playing in a bowl game that former NFL players have been in.”

Chaney, May, and Keldric’s younger brother JJ are each attending the combine for the first time.

Chaney, a bit shorter than the others at just 5-foot7-, said he felt honored to be selected.

JJ said he is looking forward to showing off his ability at the combine, where players will practice together and compete for notice before recruiters.

“I’ll be playing against others on the same skill level,” JJ said. “It will be challenging, but I think I am up for the challenge.”

May said he felt surprised and honored to be chosen for the opportunity.

Senior KD Shepard will play in the upcoming AHSAA North South All-Star Game on Dec. 16 and is committed to play at Jacksonville State University in 2023.

Pouncey works to prepare athletes for these opportunities, he said, and wants to help them achieve success whether they go on to play in college or pursue a career after high school.

“I love all these kids,” Pouncey said. “We attempt to teach them valuable lessons so they can go out and make a life for themselves.”