Successes of Lockheed Martin program touted at school board meeting

Kilcrease discussed the positive impact made during the first-time collaboration and communicated the benefits and opportunities the program will offer to high school seniors.

“It has been a pleasure working with Lockheed Martin, their missile assembly program, and these students,” Kilcrease said. “So many wonderful things have come from this first class. The unity, teamwork, and life and job skills they picked up go beyond the technical skills of assembling a missile. The students received pre-employment training in the exact same way that a new Lockheed Martin employee would. We told them that this training was part of the interview process because at the end of the class, they will be certified and given the opportunity to interview for job openings at Lockheed Martin.” 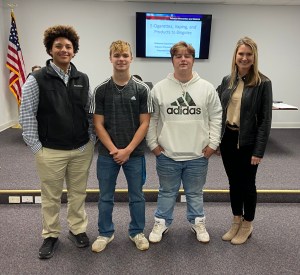 Jay Ryals, and David Michael Landrum of Brantley, and Luke McCraken of Luverne were three of the 18 Crenshaw County high school seniors to attend the first Lockheed Martin Manufacturing 101 class.

Luke McCraken, a senior at Luverne High School, was one of the three Lockheed Martin 101 students in attendance at the meeting. He is excited to be part of something that will continue to benefit Crenshaw County students for many years to come.

“I really think that my favorite part of all this is being involved, right at the start, in something that is going to be a very good program and helpful to many students in the future,” McCraken said.

The board also heard a presentation from Dr. Marilyn Lewis with KinderVision, who went over a plan to help educators fight the growing amount of underage vaping among students through a youth tobacco prevention and control program funded by a grant received by KinderVision through the Alabama Department of Public Health.
Lewis stressed how nicotine and other chemicals in cigarettes can negatively alter a still developing brain and went over some of the ways vape pens can be disguised as everyday items.

“Through our grant, we will be teaching your educators what to look for,” Lewis said. These devices can come disguised as a variety of items- sharpie pens, highlighters, gum packs, and even juice boxes. We are going to look at board policies for tobacco, not so much to make them more stringent, but to find help and see if there is something that directs students in a path that can get them the help they need to stop smoking.”
The program will kick-off at Luverne with a class for grades 9-12 about the dangers of vaping. As part of the class, students will create PSAs on vaping. KinderVision has plans for county-wide expansion and for community involvement.

Cody Carnley, Federal Programs Director, gave an update on ACIP, the Annual Continuous Improvement Plan that serves as each school’s road map for improvement in all areas.

“The ACIP is developed by each school’s leadership team and is continuously reviewed and revised as the school year progresses,” Carnley said. “ACIP is a road map that tells us what we need to work on and the leadership teams look at all pieces of data whether that is academic, parent surveys, teacher surveys, etc. and this data gives us indicators on what it is we need to work on.

Sarah Osborne, elementary principal at Brantley, and Gary Coleman, high school principal at Highland Home, were at the meeting and discussed their school’s improvement plans, future goals, and satisfaction with how ACIP has driven instruction and improved learning. Principal Kilpatrick from Luverne was unable to attend, but sent word he is happy with the progress ACIP is paving a way for at Luverne.

The resignation policy of CCS was updated to put the protocol in line with the Students First Act, a new state law.
Before the Superintendent’s Report, an election of Chairman and Vice-Chairman of the board was conducted. Sherri Claybrook was once again elected as Chairman of the CCBOE and the position of Vice Chair will continue to be held by Steve Jackson.

A bid from was accepted from S&E Site Development for installation of a new parking area at the central office. This project will be funded through funds provided by Alabama State Senator Will Barfoot.

The purchase of a 2023 Ford Explorer to replace the aging Chevrolet Impala used by the board was approved along with the recommendation to to sell surplus items from the old bus shop, which included seven roll-up doors.
Hawthorne’s recommendation to dedicate Brantley High School’s basketball court as the “Anthony C. Stallworth Court” was approved. Hawthorne said Stallworth is very deserving of this dedication, due to the nature of the basketball program he had at Brantley and its success.