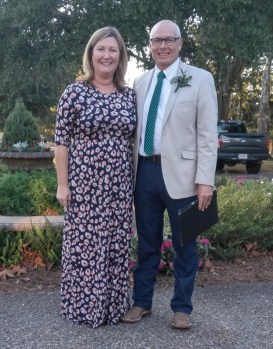 Voters elected Jon “Stae” Sanders as Crenshaw County Coroner on Nov. 8, and in January, Sanders will replace Ronny Turner, who has carried the responsibility for 43 years.

Sanders volunteers with the Luverne Fire Department and works full time with Turner Funeral Home. He served under Turner as assistant coroner and never planned to run against him. When Turner announced his intent to retire from office, Sander’s love for helping his community inspired him to run for election.

“I enjoy helping people,” Sanders said. “When a loved one dies, people need help to ensure there was no criminal activity related to the death.”

According to Sanders, the coroner’s office responds whenever an unattended death is reported. Coroners partner with law enforcement officers to investigate the cause of death and work with the Alabama Department of Forensic Sciences lab to coordinate autopsies when needed.

“We’ve always done things right and never had any issues,” Sanders reflected. “I hope that I have learned from [Turner] how to keep that going.”

In 1997, Sanders’s mother, Donna, died in a tragic car accident. Her death influenced his life, fostering within him a desire to help others through the difficulty of loss.

“[The death of a loved one] changes who we are,” Sanders said. “When we get a call, whether it’s for the funeral home, the coroner’s office, or the fire department, I know that it’s the worst day whoever we are going to help has ever had in their life. I try to keep that in mind, to realize the deceased is their dad or mom.

“I know what I felt like when I lost my mom. I wanted someone to say, ‘Just take a deep breath.’ So, I try to remember that.”

Sanders is a Luverne resident who grew up in the Oak Bowery community near Grady and graduated from South Montgomery County Academy. He and Heather, his wife of 29 years, attend Luverne Church of Christ, where Sanders serves as an elder.

“I was raised to help people,” explained Sanders. “That’s why I’m in the funeral business. I enjoy helping folks, even in bad times.”