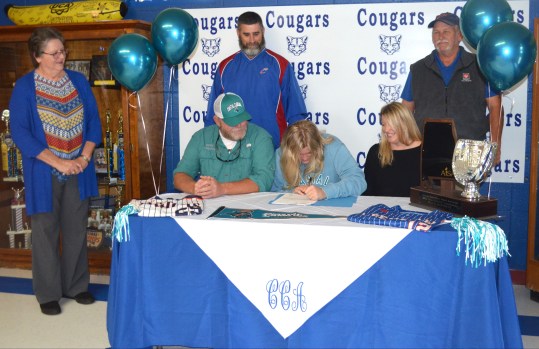 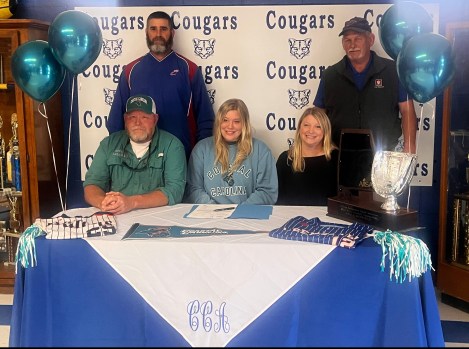 Two other colleges recruited Henderson, but after visiting the Coastal Carolina campus, she knew it was the school for her.

“It was the best choice,” Henderson exclaimed. “I went and saw it, and it was awesome.”

“This is the culmination of years of hard work,” said Lisa Henderson, Abby’s mom.

In her fifth-grade year, Henderson joined the Cougar team. In the sixth grade she moved up to lead pitcher and has played in that position ever since.

“She quickly became our main pitcher,” softball coach Russell Lawrence said. “She brings a lot of fun to the game and the girls enjoy being around her.”

Crenshaw Christian Athletic Director, Wayne Grant, coached Henderson for three years and said she works as hard off the field as she does on it, displaying a commitment that inspires her team and the younger students who observe her dedication.

“Abby is a real hard worker,” Grant explained. “She practices on her own. That makes all the difference.”

Lawrence recalled the Cougars have had several great seasons with Henderson.

“She’s a tool any coach would be blessed to have,” Lawrence said. “What I tried to do is build a team around her because she puts in all the work and she loves softball. She works every day during the summer and she’s playing multiple sports.”

Rebecca Baggett, headmaster at Crenshaw Christian, said the school works hard to provide students like Henderson with the best possible education and opportunities.

“We try to get the best coaches,” she said. “We try to give them every opportunity on the field that we can. We try to prepare them for life by building character. We have chapel every Friday and that’s just as important as reading and writing. We’re just trying to build the whole child and to be an encouragement to them.”

Henderson will pursue a business degree at Coastal Carolina and has plans to open her own business to offer pitching lessons after college.