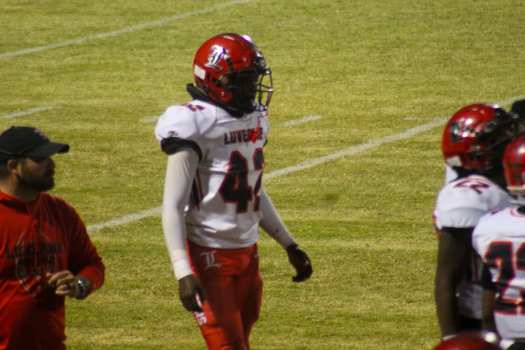 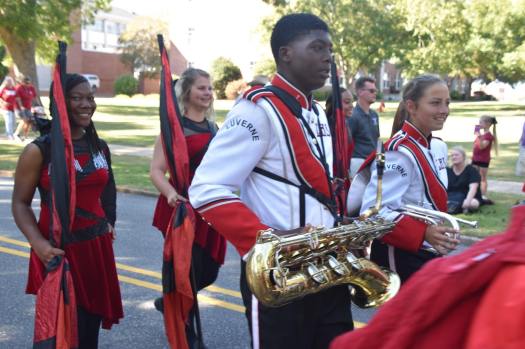 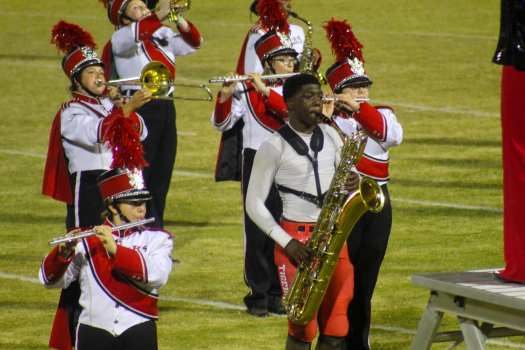 Jordan Johnson, junior at Luverne High School, is on double duty under the Friday night lights, playing outside linebacker for the football team and the baritone sax for the band.

During the Luverne Marching Band’s halftime performance inside Glenn Daniel Stadium, band members take the field and create a sea of white and black uniforms, accented with tall, plumed hats.

Found among the students dressed in official marching band uniforms is 11th-grader Jordan Johnson. Johnson’s attire doesn’t exactly match that of the other band members. One quickly notices Johnson is wearing football pants, and it appears he belongs in the fieldhouse rather than on the field. 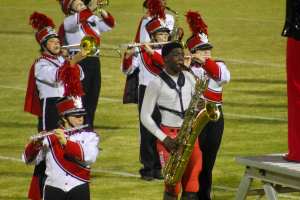 Jordan Johnson, junior at Luverne High School, is on double duty under the Friday night lights, playing outside linebacker for the football team and the baritone sax for the band.

However, Johnson is indeed a member of the football team and the band.

How is this, one might ask? Can this be true?

It is correct and the dual act is made possible due to Johnson’s diverse skillset, years of practice at both crafts, and the cooperation of Luverne Band Director Aaron Ward and head football coach Jason Rowell to ensure Johnson can continue pursuing both of his passions this season.

Influenced by his own personal drive to be successful and the examples set by his mother and sister, Johnson gives 100% to both the football team and the marching band, and takes heed when it comes to finding a balance.

“Even though it takes a lot of time and energy, I give my all to both,” said Johnson. “If I’m not at football, I’m at band. If I’m not at band, I’m at work. I want to succeed in life and have something to get me to college. My mom graduated from Alabama State, and my sister is going to Miles College in Fairfield.

“I haven’t decided yet where I want to go, but I want to work in education as maybe a teacher, band instructor, coach, or athletic trainer. I’m very thankful. Coach Rowell and Mr. Ward have been so supportive, have worked with me, and allowed me to play football and be in the band.”

On Friday nights, Johnson runs out onto the field with his teammates and plays outside linebacker until halftime when he trades in his pads and helmet for a harness and a baritone saxophone. When the halftime show is over, Johnson reconnects with his coaches and team to become familiarized with the strategy for the second half.

Ward gave Johnson a lot of credit when it comes to his critical role in the marching band and as a member of the student body.

“Jordan is a very well-rounded individual,” Ward said. “He serves as a section leader in the Tiger marching band and is one of our finest instrumentalists. He is proficient on multiple instruments: baritone saxophone and tuba. As an athlete, Jordan balances several different sports throughout the year. He is clearly an exceptional student, leader, musician, and athlete.

“Even beyond those things, he is a charismatic individual who people just enjoy being around. He is a pleasure to teach, and I am excited to see him continue to be successful in all avenues of his life.”

There is more in common between the marching band and football than the field they use according  to head football coach Jason Rowell.

“Both football and marching band take dedication in order to perfect your craft,” Rowell said. “Band, like football, has to work together to make things run smoothly. The team aspect is huge with both activities.”.

Rowell and Ward have worked together to ensure Jordan has the best experience possible with football and band. They both support students having the opportunity to be involved in a wide variety of extracurricular activities.

“Coach Rowell and I share the idea that our students should be able to participate in as many different extra-curricular activities as they would like,” Ward said. “We do not believe we should restrict our students to one activity or another. The catch is — those students have to be willing to commit their full efforts to both teams, which Jordan has done a fine job with.”

Coach Rowell said that during his 19 years of coaching, Jordan is only the third player he has coached to play football and be in the marching band simultaneously.

Rowell said that doing both can be very hard to manage and students most always pick one or the other. However, according to Rowell, Johnson has a strong handle on things

“It’s not very often that a student is a part of football, band, basketball, and baseball,” Rowell said. “Jordan is an outstanding student and teammate and we are all glad he is a Luverne Tiger. He never has a bad attitude and is all in on everything he does. We’re thankful for Jordan and his dedication to Luverne High School. He does a fantastic job representing Luverne High School.”

Rowell said he can envision Jordan being a CEO, business owner, or teacher or coach in the future., but no matter what career path Jordan chooses, he will be successful because of his attitude and character.

Jordan’s mother, Kenyon Berry, also foresees her son doing big things. She said that wherever life takes Jordan, she knows he will be an asset to everyone that crosses his path.

“I can be feeling my worst,  just throw something on, and Jordan will say, ‘You look nice, Mama,’” she said. “He is genuine, and always upbeat. He doesn’t have much free time between band, sports, and work, but he never complains. He is extremely dedicated to everything he does. He handles all this very well and I am so proud of him.”