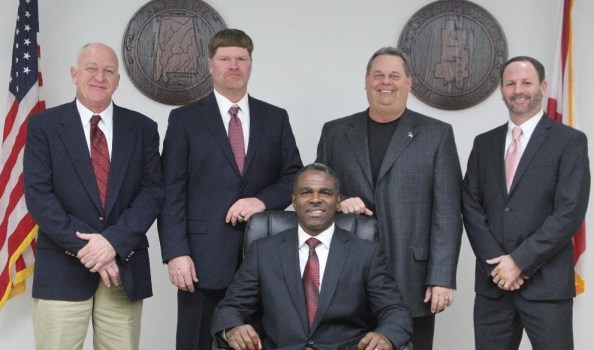 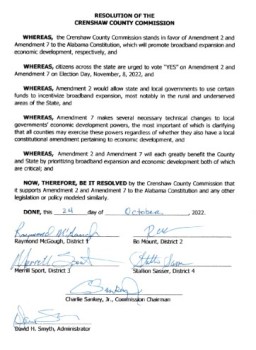 Amendments 2 and 7 pertain to the expansion of broadband services in Alabama and economic development within the state. These two amendments are endorsed by all Crenshaw County Commissioners, who acknowledged their support in a resolution signed Oct. 24.

During Tuesday’s general election, Crenshaw County voters will receive an opportunity to vote on 10 amendments to the Alabama Constitution.

Amendments 2 and 7 pertain to the expansion of broadband services in Alabama and economic development within the state. These two amendments are endorsed by all Crenshaw County Commissioners, who acknowledged their support in a resolution signed Oct. 24.

Bo Mount, commissioner for District 2, said these two amendments address a huge need in the county.

“Several of my constituents, especially those in the more rural areas, have asked me what I could do about our internet services,” Mount said. Unfortunately, this is something all our hands are tied on, but what all of us can do is vote yes on these 2 amendments. There is no internet available where I live now, and the internet at our previous home was out more often than not.”

Mount added the issue was one faced district-wide by his constituents.

“From a business standpoint, I can see that there would be little to no return on what would be a large amount of money invested to fix this issue,” Mount said. “However, with federal funds that can be used to install high-speed internet, internet providers will be more interested in expanding their coverage area. Farmers need to be able to check the weather, kids need to be able to attend school virtually if needed, and more and more companies are allowing employees to work from home. We have to have good internet for all that.”

According to David Smyth, administrator at the Crenshaw County Commission, Alabama leaders have worked diligently for years to expand essential broadband services across the largely rural areas in the state.

Smyth said the necessity for expansion is at an all-time high.

“When our students had to begin attending school virtually, many did not have adequate internet access and some had no access at all,” Smyth said. “Some companies were allowing their employees to work from home, but for many in Crenshaw County that was not an option. COVID-19 made it evident that Alabama and Crenshaw County have a lot of ground to cover regarding the expansion of high-quality internet services.”

A sample ballot can be found at https://www.sos.alabama.gov/sites/default/files/sample-ballots/2022/gen/Crenshaw-Sample.pdf

A plain language summary of the statewide ballot measure issued by the Fair Ballot Commision can be found at https://www.sos.alabama.gov/sites/default/files/sample-ballots/2022/gen/Statewide-Amendments.pdf

AM I REGISTERED TO VOTE?

WHAT SHOULD I BRING WITH ME TO THE POLLS?

You will need to show a photo ID to vote in Alabama. One of the following forms of identification is required, according to the Secretary of State.