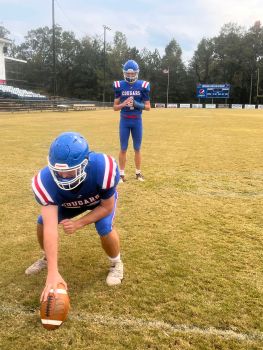 The Owens twins joined CCA’s pee-wee team in third grade. The brothers are now seniors and have played the same positions, Coleman (left) as center and Logan (right) as Quarterback, ever since. 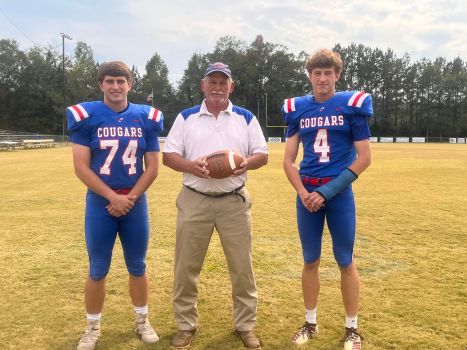 Crenshaw Christian Academy head coach Wayne Grant has shared the field and the fieldhouse with the Owens twins for five years. Pictured are (left to right) Coleman Owens, Wayne Grant, and Logan Owens. 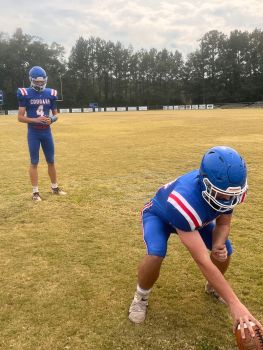 The Owens brothers work together on the field. As Crenshaw Christian Academy quarterback, Logan (left) counts on Coleman (right) to snap the ball right to him every time. 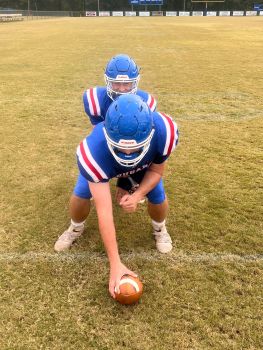 Coleman (front) and Logan (back) Owens ensure a smooth exchange of the football as center and quarterback for the Cougars.

Football-playing brothers is nothing unusual and twins on the same team are fairly ordinary. But the 7-2 Crenshaw Christian Academy Cougars boast something a bit extraordinary — fraternal twin brothers who have played in the same offensive positions at the same school since their pee-wee days.

Luverne natives Logan and Coleman Owens love playing football together. They are seniors now and have attended CCA since pre-kindergarten.

The two joined the school’s peewee football team in third grade — Logan as quarterback and Coleman as center. Except for their first year on the varsity team, the brothers have played those positions ever since.

Like any good quarterback, Logan relies on Coleman as his center and the boys work together with the team to gain the win.

“[Coleman] needs to make a good snap, then I’ve got to catch the snap,” Logan explained. “Then, he has to block, and then, I get to do my job before he gets his job done. We rely on each other.”

The pair’s close relationship gives them an edge on the field and the twins make that work to their advantage.

“We kind of think alike sometimes,” Logan said. “We know each other and what we’re gonna do and what the goal is at the end of the game, so we do what we can to win.”

Coleman takes an end position on defense and Logan plays linebacker or safety. The two make that work to their advantage too, but Coleman admits that being brothers on the field can be complicated.

“Sometimes it can be bad,” Coleman chuckled. “We might get in a little argument every now and then, when he fumbles the ball sometimes.

“I don’t always make the perfect snap, but he usually lines up a little bit to the right because I snap the ball to the right every time. He knows what I do, and I know what he does.”

Head coach Wayne Grant has shared the field and the field house with the Owens twins for five years. The twins work well together, he said, and the team sees very few mistakes at the center/quarterback exchange.

“We’re fortunate to have both of these guys that are mature at a quarterback and center position because they handle the ball every play,” said Grant. “It seems to be pretty good for us. Transitions are smooth in there, and we have very few mishandles.”

And while the twin’s close relationship adds cohesion to CCA’s team, the Owens boys are much like any other set of brothers.

“It’s good to have brothers, especially if they’re tough brothers like these,” Grant said. “And with these two growing up always competing against each other, they get mad with each other pretty easily. When they were a little bit younger, they’d fight each other at home. But now they’ve grown up a bit, I don’t see so much of that.”

Logan broke his left hand during the Cougars third season game against Chambers Academy. The injury took him into the sidelines for the next three games, a loss keenly felt by his brother.

“It has been a little strange because a different quarterback will kind of mess you up a little bit,” Coleman reflected. “Me and Logan have been quarterback and center since third grade when we started playing peewee and he’s used to me snapping the ball pretty hard. He’s used to it and he takes us better than most.”

“He came back Friday, and we could tell a big difference,” Grant declared. “He was not able to play quarterback, but he played split end, which gave us better blocking. And we ran the ball that direction almost all night because of the blocking.”

The Cougars face Lowndes Academy this Friday night, a game which will determine their standings in the Region 1 playoffs. A win on Friday will land CCA at home for their first and second playoff games. A loss will still take them to the playoffs, at home for the first game and traveling for the second.