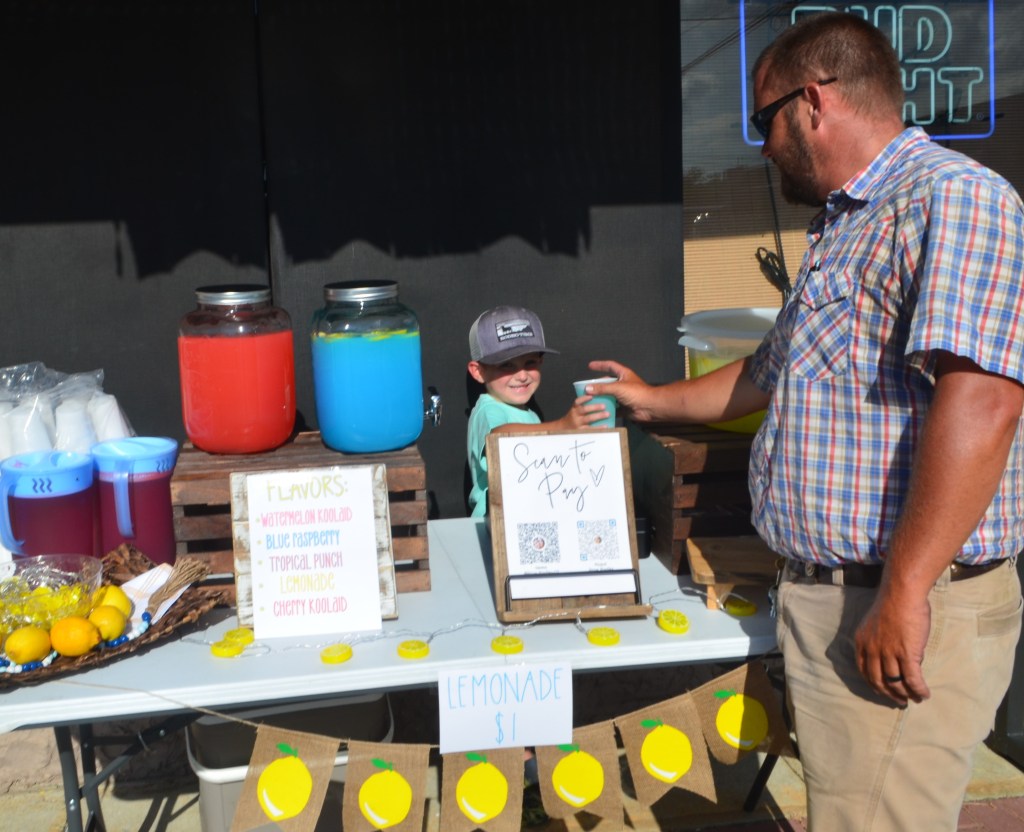 Braxton Bradley with his first customer of the day, Justin Ray. Photo by Haley Mitchell Godwin

Braxton Bradley, the son of Kevin and Paige Bradley of Luverne, is an ambitious 6-year-old that recently took his first real shot at being an entrepreneur when he operated his first lemonade stand in front of Preston’s restaurant in downtown Luverne on Friday, July 15. Braxton had been wanting a lemonade stand for a long time and when he heard his parents planning a beach trip, he decided it was the perfect time to get the ball rolling and make some spending money to use at the beach. 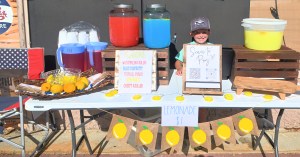 Braxton Bradley and his lemonade stand

The lemonade stand was not Bradley’s introduction to entrepreneurship. He has been surrounded by people with entrepreneurial spirits his entire life. People who have what it takes to succeed as a business owner like his grandmother, Samantha Sampley Richburg, owner of Preston’s, who says that hard work and success go hand in hand.

“What it takes to succeed is hard work and dedication. If you want it, work for it. Nothing in life is free except salvation. Braxton has always loved to work and comes from a long line of hard, successful workers. He started at a young age laying his overalls out at night and “working” on his tractor first thing. We’ve always tried hard to instill a good work ethic, and it’s important to start doing that when they are very young. I’m very proud of him and I hope he can influence others, including kids his age, to work hard,” Richburg said.

Braxton’s mother, Paige Bradley, a nurse manager (RN) for a nationwide home infusion company and entrepreneur herself that owns Mama’s Lovin’- a business that offers custom embroidery and home good items, is happy to see the long standing family tradition of working hard continue and said Braxton wants to set a good example for others and be a role model for his little brother.

“It is important to work hard and show my little brother how to act when he gets bigger,” Braxton said. “I want to do another lemonade stand soon and save my money, but if a little kid needs money, they can come help me and earn some money too. They have to be nice and work hard, even when it’s hot and even when your friends are there.”

In total, Braxton sold 80 cups of lemonade, with original lemonade being the most popular. He also had blue raspberry lemonade, tropical punch, cherry Kool-Aid, and watermelon Kool-Aid for sale. The staff at Preston’s enjoyed what was left over at the end of the night, stating that Braxton’s drinks were a refreshing treat after a busy shift.

Braxton said it was hard work getting everything prepared and packed into his mom’s vehicle, but it was all worth it. He enjoyed learning how to make lemonade and serving people. He said he is happy that he learned how to take money and give his customers their change.

Braxton wants to follow in his dad’s footsteps by owning a tree stump service and being in the military.