Meadowcrest Apartments in Luverne held their sixth annual Rock-A-Thon on June 11, 2022. The grand tally of funds raised by Meadowcrest residents for the Alzheimer’s Association came to $15,187.80, topping last year’s total. For the fourth consecutive year, Meadocrest was once again the top fundraising group in Alabama.

During the Rock-A-Thon fundraiser, residents, their families, and members of the community enjoyed free hotdogs, chips, and drinks from the Pepsi wagon. Door prizes were given out and there was live music throughout the day. Chad Sanders from Goshen began playing at 10 a.m. and performed country music and old-time gospel for the crowd. Throughout the remainder of the day, Anna Carver sang praise and worship music. Over 200 people stopped in to experience the day-long event.

Each year, Peggy Fowler,Meadowcrest site manager, sets a fundraising goal for the tenants. This year, nine of the residents met their goal of $200 or more. Those residents were Sue Brewer, Debra Updegraff, Will Dean, Mary Knight, Mary Bachelor, Ed Teague, Vivian Pippin, Johnnie Pettus and Missy Folmar. Johnnie Pettus raised the most, collecting around $2,000. Vivian Pippins came in second with over $500 in donations.

Fowler said that the annual event was another successful fundraiser. She said she is proud to be involved with such an event and is very thankful for the hard work done by residents and the tremendous amount of help offered by the community.

“At one point during the day, all 30 rocking chairs under the patio were filled,” Fowler said. “I want to thank those that came out, those that made donations, donated door prizes or helped in any way. This is very much a community event and we love our small town and the good people here that make the rock-a-thon a success year after year. Our annual Rock-A-Thon is something we are very proud of, and we all work hard leading up to it. The residents give it their all and plans are already in the works for the 2023 Rock-A-Thon.”

Jessica Carpenter Miller, with the Alabama chapter of the Alzheimer’s Association, was on hand at the event to answer questions and share knowledge about the disease.

“What we saw during the pandemic was an increase in the progression of the disease because of isolation. Care facilities were not allowing visitors so those in nursing homes could not be around their loved ones and friends and families were simply not gathering. Socialization is a big component to at least slowing down the progression of Alzheimer’s. However, this past year we did release the first new treatment for the disease in 20 years. It is an early stage drug called Aducanumab and it can actually alter progression of the disease with an early diagnosis,” Miller said.

“You all do so much for the Alabama chapter, and it is thanks to you that we are able to provide resources to those that need them. I always look forward to coming back home for these events and I am looking forward to attending the next Rock-A-Thon,” Miller told the crowd.

At the rock-a-thon,Joseph Wossilek, resident at Meadowcrest, read a poem he wrote in recognition of those that suffer or will suffer from Alzheimers in the future. 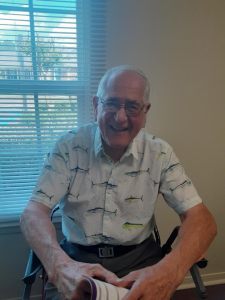 Joseph Wossilek-Meadowcrest resident and author of “Who ould it be?”

Anyone can contract Alzheimers,
from the homeless to the corporate climbers.
When we are strong and in our youth
we give no thought, to tell the truth.

It’s not about us anyway.
It’s for the elderly, so they say.
Even more, it makes us bold
to feel that we will not grow old.

So, we go on our careless ways,
not preparing for the future days.
Years go by; January to December.
Suddenly, we’re having trouble to remember.

Too much sugar, sodium and carbs, junk food and diners,
one big step closer to Alzheimer’s.
Up late with the Braves, Falcons or Forty-niners,
losing needed sleep to avoid Alzheimer’s.

Most people hate to exercise,
which over the years has proven unwise.
What do they know that is current?
Proper food, sleep and exercise are deterrents.

What foods, sleep and exercise are effective?
And how do they harm when done collective?
You can find a booklet or a book,
or on a computer, if you look.

I thank those who went everywhere in creation,
asking for help; giving a donation,
and thanks to the rockers who are not on timers,
who spend hours for the cause of Alzheimer’s.

5.8 million cases in the United States alone,
brings pain and suffering to home after home.
Thousands suffer from diseases that are related.
This is what the “Cleveland Clinic” has stated.

This is why we are here today,
gathered together and rocking away.
Who are we helping in what we do?
It’s possible that it could be you.

More information on Alzheimer’s and where to find support can be found at https://www.alz.org/