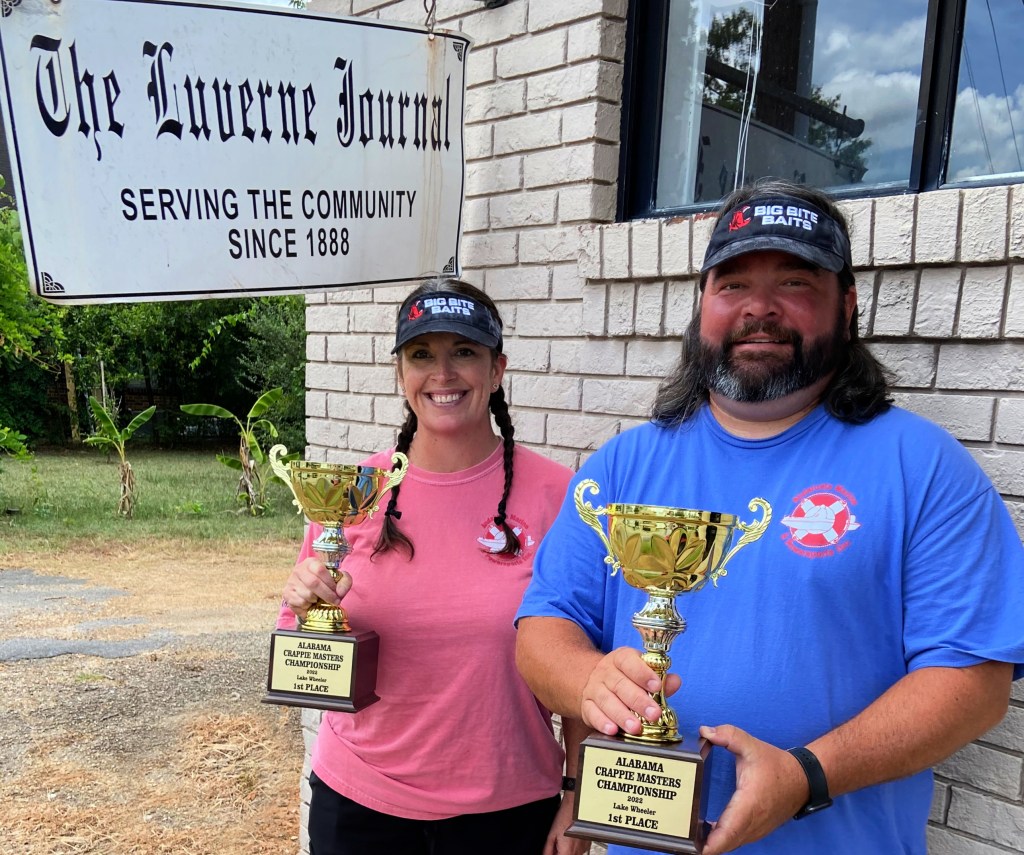 A pair of local anglers, Jon and Jessica Folmar, took home first place honors and a cash prize at the 2022 Alabama Crappie Masters Championship. The championship was held June 17 at Wheeler Lake in north Alabama.

The husband-and-wife team have been fishing together for years but only started fishing competitively two years ago. They were the 2021 Crappie Masters Angler Team of the Year, top male and female team in the state and placed second in last year’s championship. Last year’s loss of only 0.06 pounds increased their motivation to bring home a state title this year.

Although weather conditions were less than favorable for winning a state title, with heat indexes over 100, Jessica took the lead at the beginning of the event, catching two fish that ended up making it to the final weigh in. Later in the day, a thunderstorm came through making the waves very choppy. Team Folmar made it in safely, but their fishing time was cut short.

The Folmars said that the June championship was tough on many levels.

“It was a hard one to fish and there were just not as many crappie on the lake as in some of the other lakes we’ve fished,” Jon said. “Everybody in the championship had a hard time. It was scalding hot, and the fish were really deep, 28 or 30 feet. After catching them that far down, it’s a challenge to keep them alive for the weigh in. We use belly weights on the fish to keep them upright and pump oxygen into the livewell, but sometimes nothing works.”

Jon and Jessica fished from their Xpress X19 bass boat they purchased from Andalusia Marine. The boat reads “Team Folmar” on the side. The reels they fish with vary, but they always use jigs from Big Bite Baits or hand tied jigs that Jon makes. The Folmar’s use a Garmin Live Scope, a forward-facing sonar. According to the Folmars, being good with electronics is a key piece to catching the big one.

“It is getting really technical now, and if you don’t have the latest and greatest fish finder, it is hard to be competitive. It is really neat to watch. You can see the jig fall and then you can watch the fish interact with it and with each other,” Jon said.

The team chalked up their victory to the prize-winning lures they use, dedication and persistence. Team Folmar will move on to the Crappie Masters National Championship in Grenada, Mississippi scheduled for September 23 and 24.