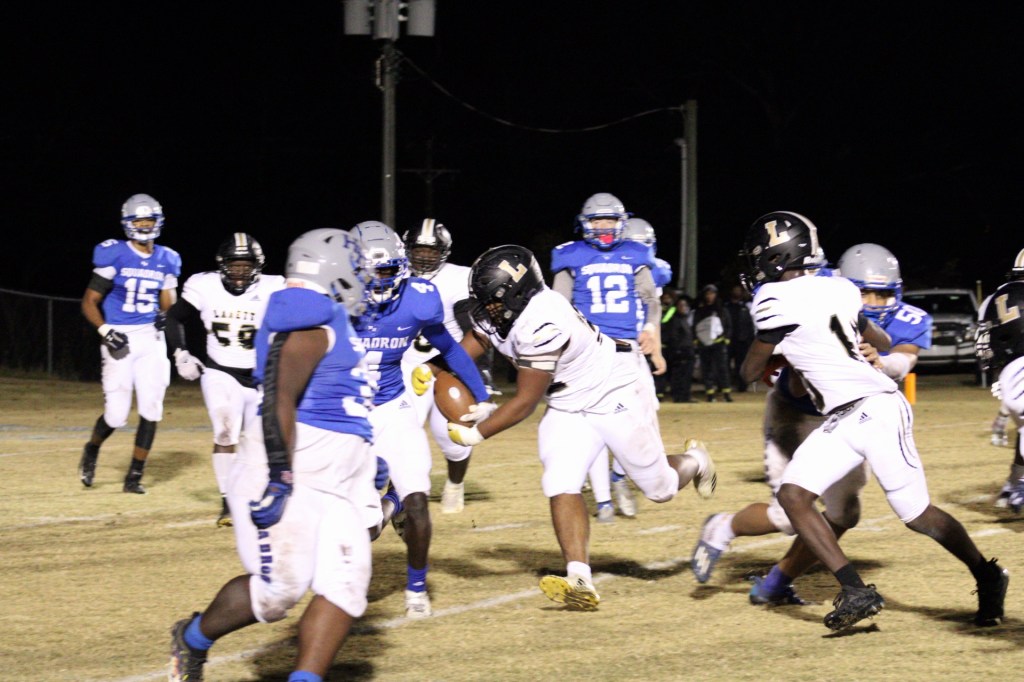 Highland Home overtakes Lanett in a nail-biter of a game with a final score of 15-14.

The Highland Home Flying Squadron met the Lanett Panthers under a full moon Friday night to determine which team would advance to the final four.

Adrian Daniels, Highland Home’s Athletic Director, could be seen walking the sidelines before the game in a short sleeve t-shirt, despite the drop in temperature. When asked where his jacket was, he simply replied, “it’s in the stands in my seat. I have a process. I can’t put it on until after they’re on the field.”

Daniels was not the only one leaving nothing to chance. Others could be heard discussing what chair they sat in last week so they could make sure they sit there this week. Apparently, it worked.

Highland Home won the coin toss and deferred to receive the second half.

JJ Faulk kicked off the last game of the semi-finals with the Panthers receiving at their 28-yard line.

The Panthers were quickly taken down in the following play with a loss of two, setting an unspoken precedent for how the night would play out.

Squadron Keldrick Faulk broke up Lanett’s pass and followed up with a quarterback sack putting the Panthers at fourth and 23 causing them to punt the ball away.

Lanett then turns the tables on Highland and Lamontae Gilbert makes the tackle for Lanett. The Lanett defensive line gave nothing away as the Squadron tried to move past their line.

Ja’vontae Cooper repays the Squadron by taking out quarterback Nick Diaz for a loss of nine.

Highland is unable to get a first down and punts away.

Madden is taken down for another loss for the Panthers. He redeems himself on the following play and makes the first-first down of the night.

Lanett gets another first down at the 31-yard line.

Jacob Sanky and an incomplete pass to the end zone stalls the Panthers’ progress toward a touchdown.

The first quarter ends with no score but contained some very hard hits as both teams put their all into the game.

The second quarter was much the same, with neither team giving much up. Gibson starts the quarter off with a quarterback sack, taking Diaz down from behind causing Highland Home to punt the ball away.

Caden Story is able to complete a pass to give the Panthers a first down. The Panthers are unable to move the ball any further than that and punt back to Highland.

KD Shepherd scored the first touchdown of the night for Highland Home.

Lanett tried to score playing a passing game, but they could not follow through.

In what was the play of the game, Lanett’s No. 52 grabbed the ball away from KD Shepherd and runs it in for a touchdown. 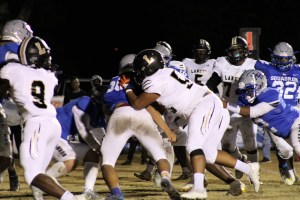 Lanett intercepted the ball during the final play before the half.

Third-quarter started with Highland in the lead 7-6.

The Panthers push back hard and sack quarterback Nick Diaz. The Squadron end up punting away. The Squadron defensive line holds tight and Lanett is forced to punt the ball back.

Tieko Williams intercepts a pass from Highland. Madden was able to get a first down and Goodman makes it to the end zone for a Panther touchdown. Two-point conversion is good.

Highland is able to reach the end zone at the beginning of the fourth quarter.  They take the lead with a 15-14 score.

The Lanett Panthers fight hard the rest of the quarter to retake the lead but cannot get past the Squadron defense, ending their season and falling just short of a championship.

Highland Home will travel to Clark County next week for the final four matchup.