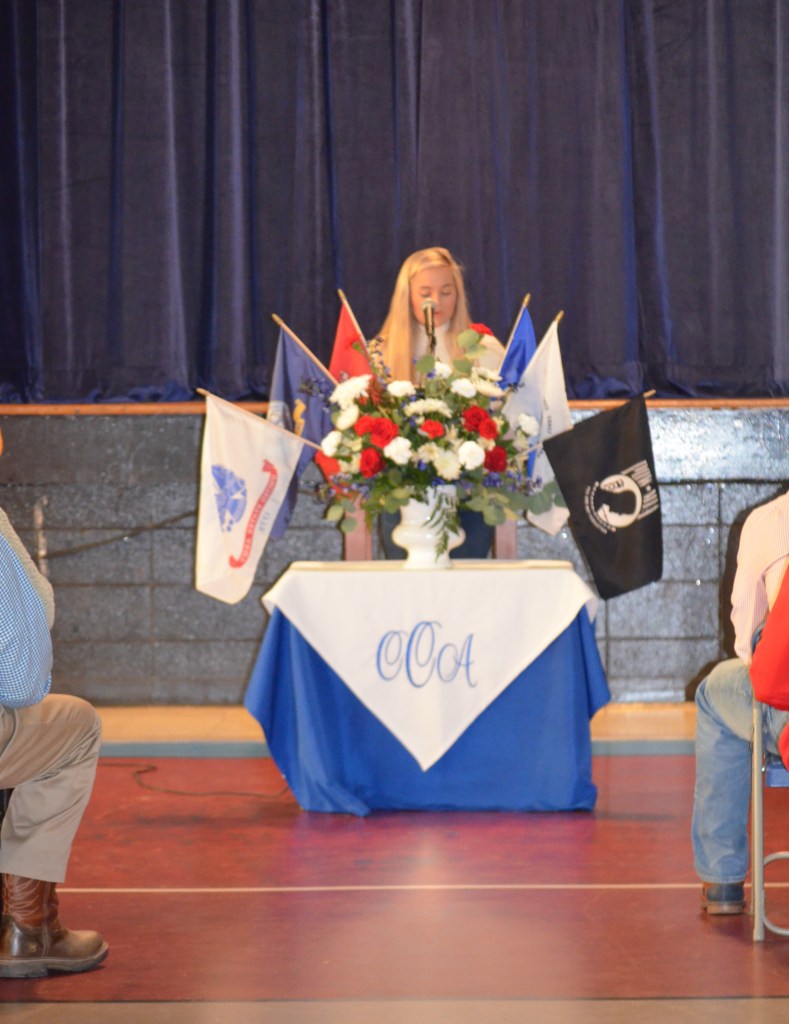 Crenshaw Christian Academy held their Veterans Day Program on Wednesday, Nov. 10. An open invitation was extended to all local veterans. Prior to the program, a breakfast was provided for the veterans in attendance and their families.

Members of CCA’s high school Student Government Association (SGA) put the program on as well as provided and served the breakfast.

To start off the Veterans Day program, Gage Young gave a welcome speech. The welcome was followed by a prayer led by Brianna Toney. The Pledge of Allegiance was then led by Baleigh Johnson and Aly Billings just before the National Anthem was played.

A roll call of fallen soldiers was read and living veterans were also honored. The anthem for each branch of the military was played, as members of each division stood accordingly. The guest speaker for the event was Sergeant 1st Class Samuel Sanders who spent 14 years active duty and 35 plus years in the Alabama Army National Guard and still continues to serve. He was deployed in Desert Storm and to Dubai as well as Kuwait. 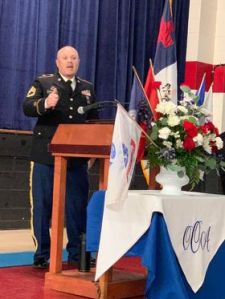 Sanders discussed the sacrifices soldiers have made and how they have paved the way for young people to have the kind of lives they have now, lives that include freedoms that did not come free.

TeLenna Sasser Jones, secondary sciences teacher at CCA and SGA sponsor has been organizing the Veterans Day program for three years. The pride Sasser has for her country is an innate component of her being.

Jones’s father, Dwight Sasser, was drafted during Vietnam and spent one year fighting in the war. Her husband, David Jones, joined the United States National Guard 25 years ago and is still serving. At one time he was activated and sent to Guantanamo Bay.

Both men are exemplary proud Americans that genuinely care about the future of this nation. Sasser said that paying respect to our veterans through school programs is of utmost importance.

“The freedoms we have; being able to choose a school of your choice, deciding upon a career and making our futures be whatever we want them to be, are freedoms that we have because of our veterans. When the kids see veterans in the flesh, eat breakfast with them and hear their accounts of service or of war, live and in person, then soldiers and what they do to protect us and keep us free becomes real to them and doesn’t just sound like a story they’ve been told or just something they read in a book,” Jones said.

Kadee McGough, an 11th grader at CCA and the scrapbook editor for the SGA, has a bit of pride ingrained within her as well. Her grandfather, Billy McSwean, served in the United States Marine Corps Reserves and the Alabama National Guard.

He is now a reservist retiree. McGough’s great grandfather, Johnny McSwean, was in the Navy during WWII.

“Hearing the stories my grandfather tells me makes me beyond proud of who he is and how he came to be the man he is. I have learned that being a proud American means being brave, loving your country and respecting liberty,” McGough said.

McGough said that the Veterans Day program is important to her because of the meaningful traditions that CCA is grounded in and because it gives her a chance to give thanks to the men and women who serve and have served to protect our country. She hopes the country can be restored and said it was an honor to be in the program.

Gage Young made the closing remarks and the program ended with playing of “Taps.”