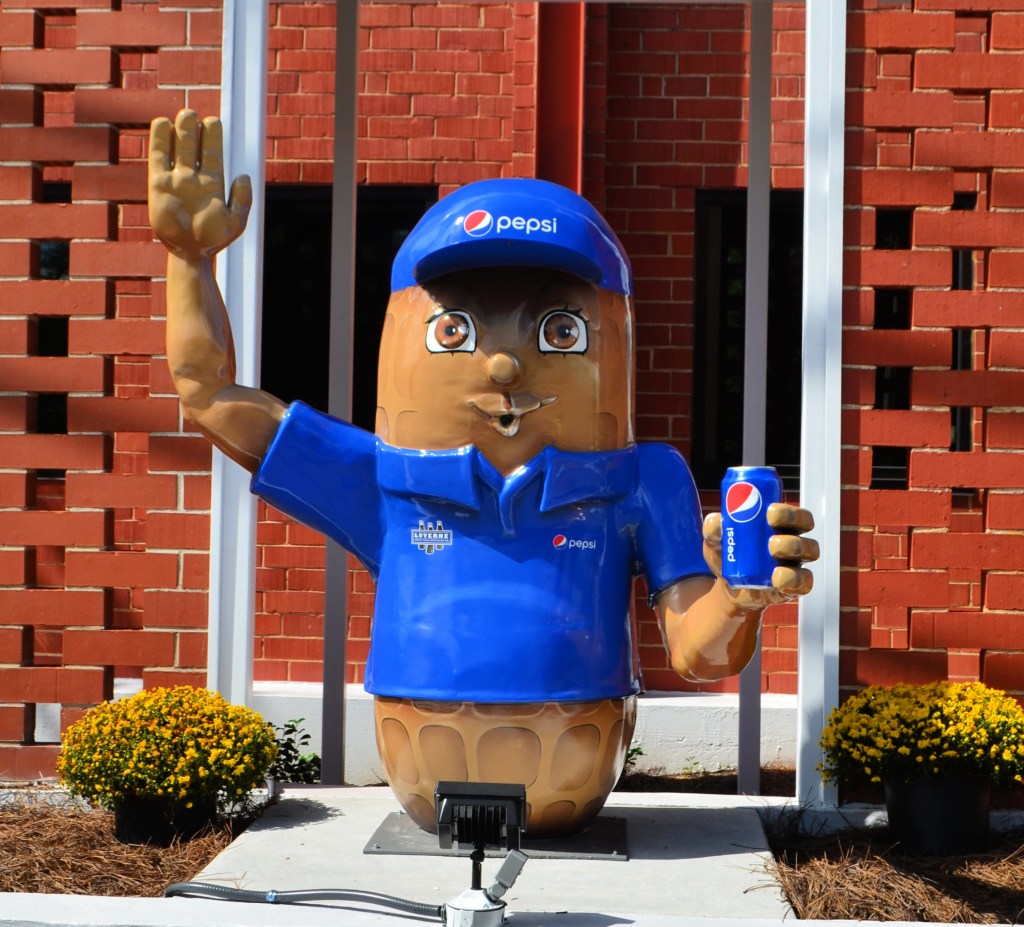 Pepsi of Luverne welcomed their newest family member in early September, Goober the Pepsi peanut. The company placed the nearly five foot tall piece of artwork right in front of the Pepsi Distribution Co. in Luverne for all passersby to see.
The peanut is a tribute to Pepsi’s thankfulness and pride for being located in a great community, according to Bobby Brasher, chief operating officer whose career in the beverage industry spans over 35 years.
“This idea began with discussion about updating our billboards and how we really just wanted to celebrate Luverne and being a local company. We wanted to commemorate our pride for being part of this wonderful community. Pepsi has been in business here in Luverne for 100 years and with the city’s long history of being known for the world’s largest peanut boil, I felt that the Pepsi peanut would be a great way to express our gratitude,” Brasher said.
It was during a meeting with the owner of one of Pepsi’s customers, Pepi Foods, located in Dothan, Ala., that Brasher really finalized his mental idea for the peanut. The company in Dothan is home to one of the many peanuts found around the city and Brasher really liked the display. He asked the owner, Vic Hendrix, where the peanut came from.
As it turned out, Hendrix’s daughter is the owner of Replica Plastics, the company that made the peanut at Pepi Foods, as well as others around the city of Dothan. Brasher worked closely with Replica Plastics owner, Jenny Hendrix.
They decided to follow the theme seen around Dothan and dress Luverne’s new peanut in a Pepsi uniform. Brasher and Hendrix agreed that the peanut needed to be holding a Pepsi in one hand, but they were not sure what his other hand should be doing.
Ultimately, Brasher decided that they would use the peanut’s other hand to wave to traffic as it went by.
“We’ve had a many tourists and people coming through spot the waving peanut and stop to take pictures with the art piece, and that is what we want. I hope that the Pepsi peanut will spur other businesses to do something similar. I would like to see these public art type projects create our own little tourist attraction here in Luverne,” Brasher said.
Brasher said that he would be happy to answer any questions that businesses interested in placing a peanut might have.