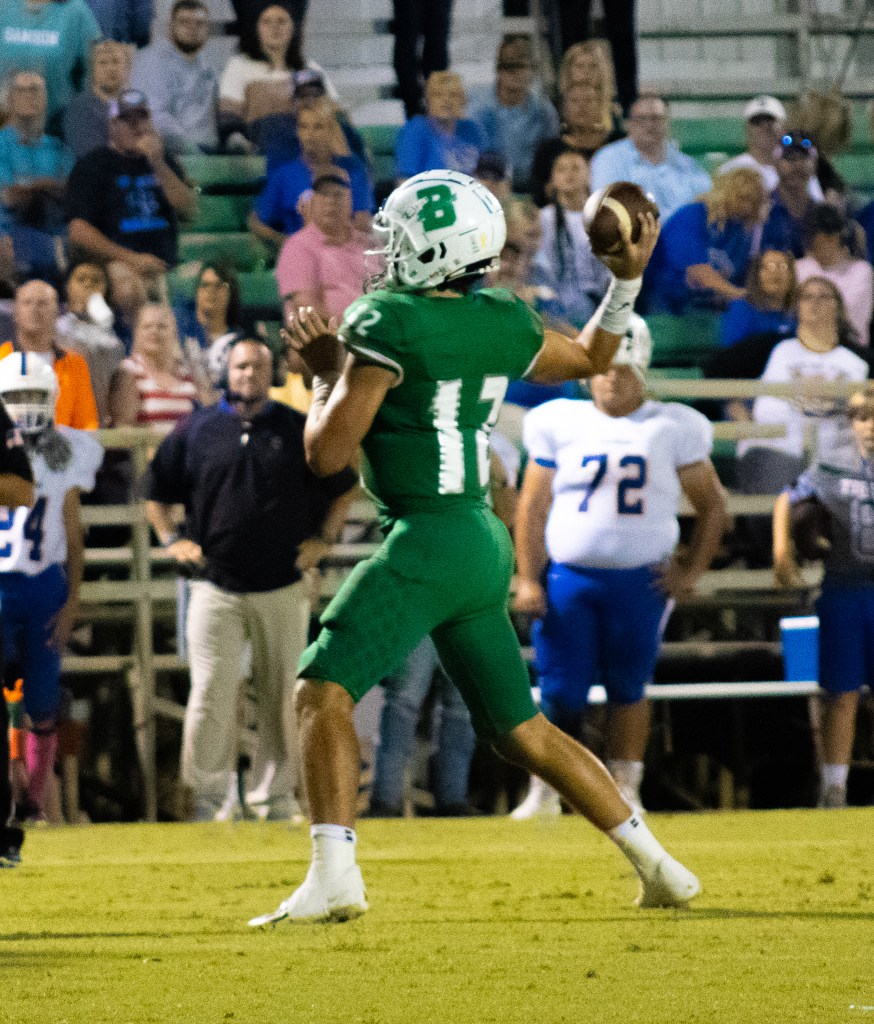 The Brantley Bulldogs pulled off another win Friday night against the Samson Tigers despite losing their senior quarterback, Tucker Kilcrease, in the second quarter. The Homecoming game ended with a final score of 46-18.

“It was a physical game; we had several kids step up,” Bulldog’s Coach Roland Jones said. “It was Homecoming and it was hard to get them to focus, but we found a way to put things together. We are in first place in the region and that is big for the playoffs. I was so pleased with Jayden Parks, a freshman, for stepping in for Tucker in the second quarter when he got hurt. Great night for that young guy.”

The Bulldogs led the Tigers 20-6 at the end of the first quarter. Kendrick Brown put the first points on the board with a 4-yard touchdown. The Tigers quickly responded with a 91-yard kickoff return touchdown letting Brantley know they were in it for the win.

Robert Shine and Jayden Parks followed up with two more touchdowns in the first quarter. Tucker Kilcrease added a two-point conversion. The first quarter ended 20-6 with the Bulldogs in the lead.

Shine crossed into the end zone in the second quarter with a 1-yard run, putting the Bulldogs up by 20 going into halftime.

Following the Homecoming Court presentation at halftime, the Bulldogs came out ready to fight.

Parks, a freshman, took over for senior quarterback Kilcrease and completed a 32-yard touchdown pass to Khaliq Smith, with Jon Bush getting the extra point.

Brodey Mixon added a 25-yard touchdown by the Tigers, followed by a 51-yard touchdown pass by Parks to Daquan Pittman. Bush completed the extra point bringing the score to 40-12 going into the fourth quarter.

Pittman made a 57-yard touchdown run, but the Bulldogs were unable to pull off the two-point conversion.

The Tigers were able to add one more touchdown with a 27-yard touchdown pass but were unable to complete the two-point conversion as well.

Parks was able to complete 143 passing yards during the game. Pittman completed one touchdown, 106 rushing yards, and 82 receiving yards. Kendrick Brown led in tackles with five and four assists.

The Bulldogs will take on Georgiana at home tomorrow night.

Fans will have to wait and see how Brantley handles the loss of Tucker Kilcrease, an instrumental player, this year. According to Jones, Kilcrease will be out for four to six weeks with a broken foot.