Heroes among us: Three young men risk their safety to save lives 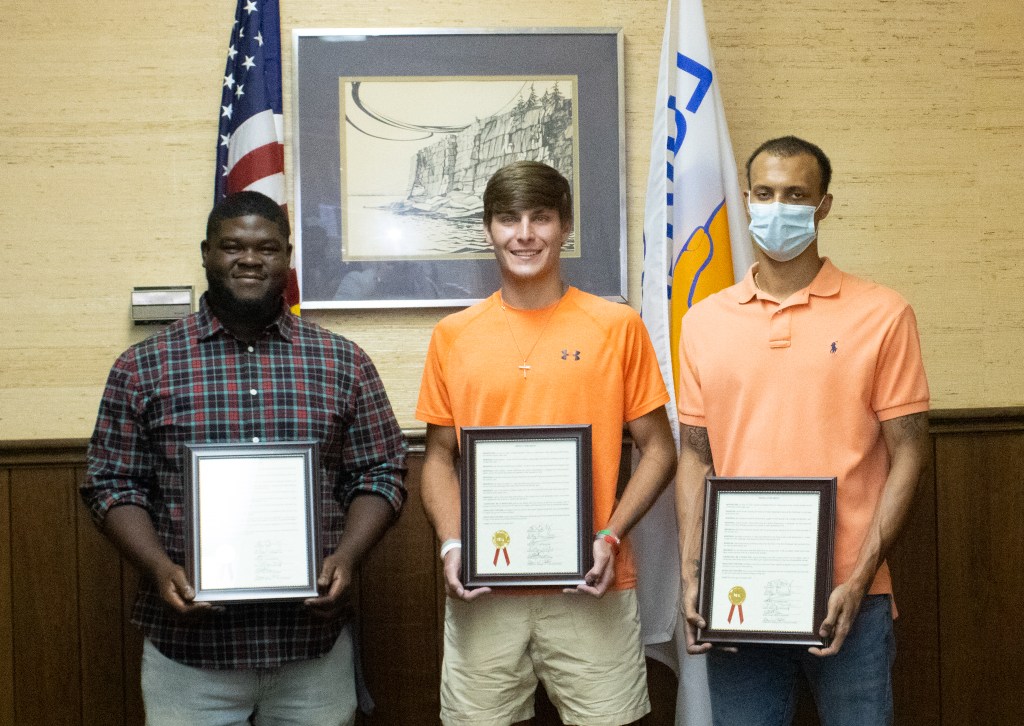 A vehicle crash that occurred on July 29, 2021, at Crenshaw County Lake may have taken one person’s life, but it also changed the lives of three young men.

The Luverne City Council presented Austin Bryant, Tanner Simmons and Kalon Washington with a resolution honoring each of them for their brave actions that day.

“What you three young men did was above and beyond the call of duty, and I think that on behalf of the city, we need to make this official to show how proud we are of y’all and everything that y’all did.” Councilman Kip Smith said during the presentation.

The three boys rushed to the scene of the accident and helped pull a 31-year old mother and a 13-year old girl from the vehicle, saving them from the fire that was quickly engulfing the car.

Austin Bryant recalls the events of that day clearly.

“I was working at the lake that day. I was sitting inside of the shop and Austin and Kalon were out fishing. I saw the car come through the gate, and it looked like they were just parked.”

“Then, I saw both Austin and Kalon come to shore on the boat and run to their car which got my attention. But the car was not on fire then. When they got around to the other side of the lake is when I saw that the car had caught fire. I ran out of the shop and got in my truck and hurried over to help them out. We got two people away from the car and were trying to calm them down while we waited on firefighters and rescue,” Bryant said.

“When I got to the car, I really wasn’t thinking anything except helping them and getting everyone away from the car. After it was all over, it was just a lot of mixed emotions about everything that was going on.”

“It’s times like those, I wish everybody had the heart to do what was right because that’s all I was attempting to do was the right thing,” Bryant said.

Carey Neal, Bryant’s mother, said he wished he could have done more, but he did what any decent human being would do in that situation: help someone in need.

“As a mother, I was very proud of his actions,” Carey said. “But his grandfather (Assistant Fire Chief Neal) is a great mentor in his life and has always taught him how to be a helper in the community.”

Carey said Austin called her dad, Assistant Cheif Neal, when it happened, and he told him what to do.

“Austin was terrified and scared, so he knew his grandpa would get him through it.”

Tanner’s Uncle, Lee Simmons, is the park director over the County Lake and a police officer for the Brantley Police Department expressed his gratitude towards the young men.

“As soon as the guys heard the accident, they called the proper authorities and took off .6 of a mile around the lake to help,” Simmons said. “These young men went above the call of duty to rescue the victims in the vehicle. These three young men disregarded their own life to help. I thank the lord above that these three young men were down there during this tragedy and knew what to do to help save the lives of these victims. They’re true heroes in my book.”

1A Best in Class Band