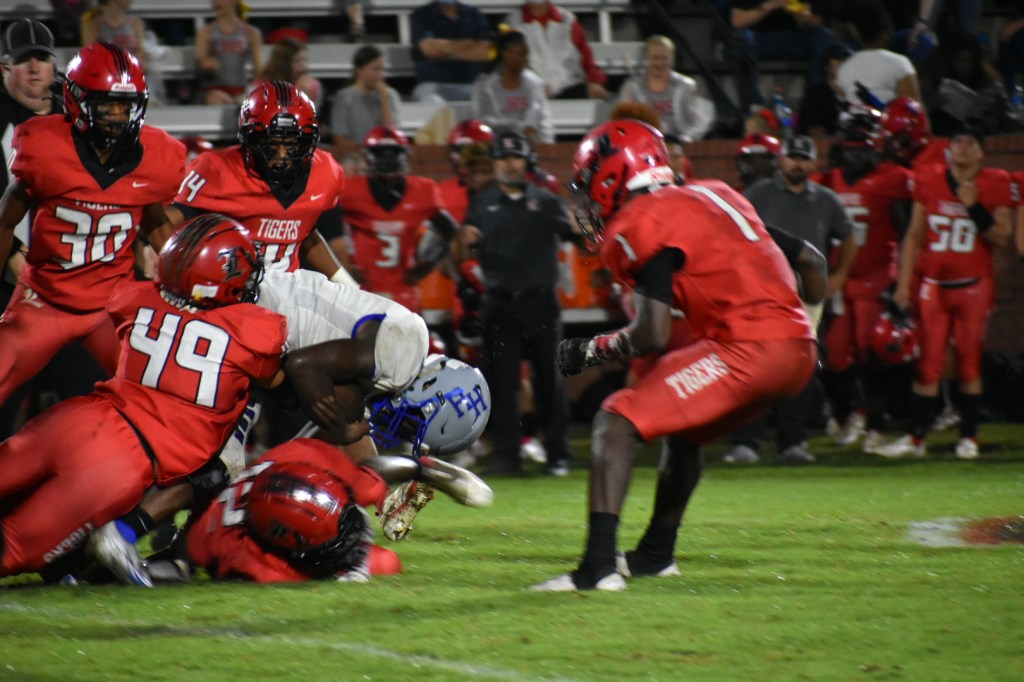 Photo by The Squadron Network

Correction: A correction has been made to quotes said by player Nikki Taylor Jr. that was incorrectly attributed to Coach Jason Rowell. As always, The Luverne Journal apologizes for the mistake and is happy to correct any incorrect information.

In the much anticipated county rivalry, Highland Home lost bragging rights for the year, falling to Luverne 0-41.

It was a hard fought battle for the Tigers. Highland Home Squadron’s defensive line worked hard to keep the Tigers out of the end zone during the first half of the game, but ultimately couldn’t stop the Tiger’s offensive line.

“I thought our physicality, awareness, and pursuit of the football on defense was a bright spot in the game,” Luverne Coach Jason Rowell said. “Coach Horn and our defensive staff did an exceptional job of preparing our kids. Overall, I was just really pleased with the effort and intensity of our team.”

Rowell said his team needs to work to limit penalties and mistakes in the future.

“I know it was a rivalry, but we have to do a better job of keeping our emotions in check. Offensively we have plenty to work on, and we have to go back to the drawing board and focus on getting ourselves better,” Rowell said.

Friday night’s game turned out the way Nikki Taylor Jr., LHS player, expect in some ways and not in others. He said he had counted on winning the game but expected the score to be much closer.

“Seeing how our team clique and came together for such a good opponent,” Taylor said when asked what the best part of the game was for him. “It seemed everybody was in the right place at the right time. It was fun seeing our guys come together as a team.”

The Luverne Tigers will be working on staying staying humble and not letting the rivalry win go to their heads Taylor said.

“We still have a long season ahead of us. We can’t become complacent or satisfied with one win.”

John Taylor leapt into the air snatching the ball and turned an interception into a 24-yard touchdown. Deontae Harris completed a 34-yard punt return for a touchdown, shaking off near tackles to reach the end zone.

#1 Nikki Taylor (WR/DB) is the spotlight player of the game with 4 receptions, 48 receiving yards, 1 Fumble recovery and 1 touchdown.